This is not the Part 2 I was planning to post. Guess there will be Part 3!

Big quakes in Mexico are not unusual and they cause enormous damage, deaths and injuries.

The western U.S., and British Columbia, Canada, have seen an above normal wildland fire season. Many commenters think this is abnormal. It’s not.

Going back even further, we can see that fires prior to 1950 burned vastly larger number of acres each year. 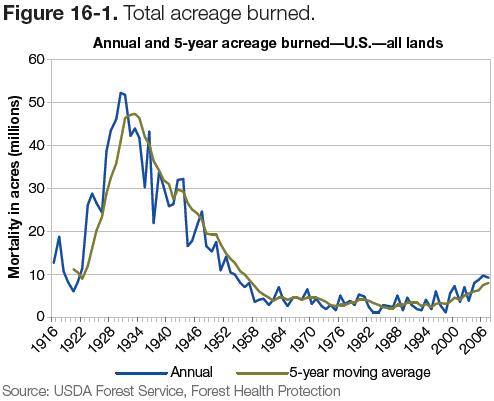 (Much of this has to do with how the U.S. did or did not fight fires at various times, and how fires are a natural part of the ecosystem. Aggressive fire suppression for decades has resulted in built up fuels.)

This year has seen the most hurricanes since  … 2005.  Then we had a 12 year drought of land falling large hurricanes. And people forgot that Florida has been hit by 119 hurricanes since 1850. Hurricanes, even large ones, are not unusual. For emphasis, here is what the scientists say.

There was a solar eclipse visible in the United States, in August. Total solar eclipses occur somewhere about every two years, on average.

People are constantly pattern matching their current experiences to create a model of how they think the world works. Not surprisingly, based on social media posts, people have concluded that

This illustrates how many are easily persuaded of logical nonsense.

Twitter is filled with bizarre tweets linking quakes, hurricanes, fires – and even the solar eclipse – to confirmation of human caused climate change. Yes, the eclipse caused fires! Hurricanes! Is there anything it can’t do?

I started to collect snapshots of the Tweets but there were far too many and I gave up.

Yet it is clear that many – including seemingly “smart” people – are drawing these correlations and have convinced themselves that quakes, hurricanes, fires, solar eclipses and climate change are all linked together!

Further, they believe it essential to share their propaganda with everyone on social media.

NBC News tried to push the “this must be unique” moment with the following:

If the problem with this silly statement is not obvious, consider the annual variance: “normal” varies between a minimum of 4 and a maximum of 28 named storms per year.

And then think about what “average” means.

Any cookies that may not be particularly necessary for the website to function and is used specifically to collect user personal data via analytics, ads, other embedded contents are termed as non-necessary cookies. It is mandatory to procure user consent prior to running these cookies on your website.